Works on new playground near completion 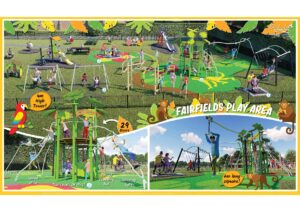 The newly renovated younger children’s playground will open before the end of September.

Fairfield is leased from Lord Petre and maintained by the parish council. It is situated behind St. Edmund and St. Mary Church, between Star Lane and Fairfield and is a popular place for families, youngsters and dog walkers. Historically, Star Lane was known as Fayre Lane and provided access to Fair Field, now known as Fairfield.

There is a fenced play area especially for the under 12’s and a separate area for older children including a hard court, climbing wall, youth shelter and skate park. The rest of the field includes a cricket pavilion and pitch (home to Ingatestone and Fryerning Cricket Club), a pond, some seating and two public footpaths, one of which leads to the railway station and the other to Ingatestone Hall.

It is the under 12’s playground which is to be refurbished although many of the existing pieces of play equipment will be incorporated into the new design. Permission has been willingly given by Lord Petre for this project.

Development ideas have been based on existing playgrounds in the borough. Brentwood Borough Council planning officers have confirmed that planning permission is not required for this project. Initially, 18 companies expressed interest in the project. The budget for the project has been agreed by the parish council and all proposing companies were working to the same budget. References and examples of work were included in the tendering process.

At the Facilities Committee meeting on 12 April, viable companies’ designs were discussed as part of the selection process. From 13-30 April, councillors undertook consultation with local schools, playgroups etc and put in place an online consultation. At the Full Council meeting on 6 May, the council appointed Proludic to undertake the work.

The work started on 9 August and will look to be completed before the end of September. A grand unveiling event will be announced shortly which we hope will be a great opportunity for the children to try out the new equipment.