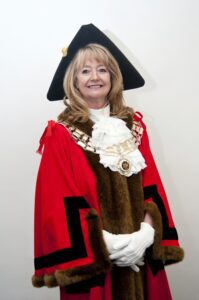 Brentwood Borough Council has elected Councillor Noelle Hones as the Mayor of Brentwood for 2016/17 to take over the role of ambassador and first citizen of the borough for the coming year.

Her appointment was made at Annual Council on Wednesday night (18 May 2016), where members of the Council were joined in the Council Chamber by residents, family members and friends to witness the traditional Mayoral ceremony. Her husband, Councillor Jon Cloke, will be her consort.

Councillor Hones, who is Brentwood’s 25th Mayor, was born and brought up in Basildon. The youngest of five children, she was educated at St Anne Line Primary School in Basildon and La Sainte Union Convent School for Girls in Grays.

She left school aged 16 and went to work in the City for JP Morgan Bank. After 12 years at the firm she rose to the position of Assistant Vice President heading the Administrative Support Team for the Interest Rate Swap Traders. She loved every minute of it, and met some wonderful people, many of whom are still her friends today.

She stayed at the bank until leaving to start a family and decided that being a full time mum was the best career move she ever made.

Her eldest son Matthew was born in New York in February 1990 while they were living in America. Before he was born, Noelle was working temporarily for the New York Cooking School in Greenwich Village as a receptionist. They then returned to live in Fryerning in 1992 and Noelle had two more sons, George and Oliver, who were born in 1993 and 1995 respectively.

Noelle now lives in Ingatestone with her husband Jon and their two yellow Labradors, Sonny and Lucy.

She was elected to Brentwood Borough Council to represent Ingatestone, Fryerning and Mountnessing in 2007.

During her time as a Councillor for the rural ward Councillor Hones has worked with Parish Councils, Community groups and volunteers for the good of the villages.

There is a wonderful sense of community in Brentwood and both myself and my husband Jon are particularly looking forward to meeting the unsung heroes of the voluntary sector and those that represent the Armed Services.

“My chosen charities reflect two things that are dear to my heart – children and animals, and so I am delighted to be supporting the following three charities:

Leader of the Council, Councillor Louise McKinlay, said: “I would like to welcome Councillor Noelle Hones as the new Mayor of Brentwood. She has been a passionate advocate of her ward Ingatestone, Fryerning and Mountnessing and I know she will bring that same enthusiasm to her role. I know she will be an excellent ambassador for Brentwood.”

The outgoing Mayor, Councillor Mark Reed, has raised £9,700 for his mayoral charities SNAP, Special Needs and Parents and Brentwood Philharmonic Orchestra with a donation also going to Brentwood Skatepark Association.

Councillor Will Russell, ward member for Brentwood West, was appointed as Deputy Mayor for 2016/17. His wife Naomi will be his consort.