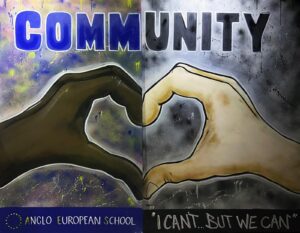 Earlier this year the Economic Development Working Group met with Brentwood Borough Council to discuss local community projects that could be financed through the Welcome Back fund. A number of projects were curated including an art project involving sixth form Anglo European students.

The students were given the title ‘Hidden Figures’ to inspire a piece of work that bring hidden figures to attention. The students created a number of pieces of artwork that are being displayed at both the school and the Market Place bus shelter.

The community mural was officially unveiled at a launch event at the bus shelter on 7 December 2021. Head girl and deputy head girl, Anoushka and Yana spoke at the unveiling about the importance of diversity in our community.

Anoushka said “If the past few years have proven anything, it is that teamwork and solidarity conquers all. That is what the artwork means to us, coming together as one.”

We would like to congratulate both the students at Anglo European School for being a credit to their school and our community.